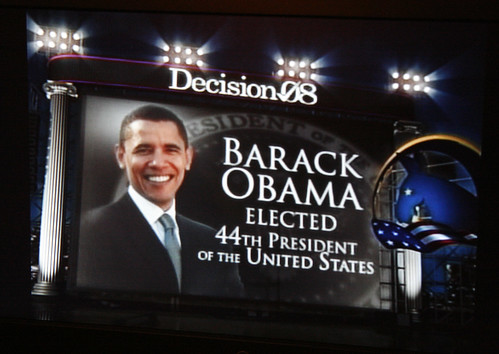 Yes, it is time to hope again.

Above all, it is time to celebrate the country’s wholehearted embrace of democracy, reflected in the intense engagement of Americans in this campaign and the outpouring to the polls all over the nation. For years, we have spoken of bringing free elections to the rest of the world even as we cynically mocked our own ways of conducting politics. Yesterday, we chose to practice what we have been preaching.

Barack Obama’s sweeping electoral victory cannot be dismissed merely as a popular reaction to an economic crisis or as a verdict on an unpopular president, though the judgment rendered on President Bush is important.

In choosing Obama and a strongly Democratic Congress, the country put a definitive end to a conservative era rooted in three myths: that a party could govern successfully while constantly denigrating government’s role; that Americans were divided in an irrepressible moral conflict pitting a "real America" against some pale imitation; and that market capitalism could succeed without an active government regulating it in the public interest and modestly redistributing income to temper inequalities.

John McCain believed he could win by attacking Obama as a "socialist" who had said he would "spread the wealth around." But a substantial majority rather likes spreading the wealth if doing so means health coverage, pensions and college opportunities for all, or asking the wealthy to bear a slightly larger share of the tax burden.

"John McCain calls this socialism," Obama said at a Pittsburgh rally last week. "I call it opportunity." So did the voters.

Right to the end, McCain and Sarah Palin thought ideological name-calling would work yet again. On the eve of the election, McCain attacked Obama for being in "the far left lane of American politics" while Palin warned of a victory for "the far left wing of the Democrat Party." This year, those epithets didn’t hunt.

After 1980, Democrats often chose to accommodate themselves to conservative assumptions. Obama exploded the old framework. He explicitly rejected the idea that Americans were choosing between "more" or "less" government, "big" or "small" government.

He cast the choice differently. "Our government should work for us, not against us," he would say. "It should help us, not hurt us." Obama ran as a progressive, not a conservative, but also as a pragmatist, not an ideologue. That combination will define his presidency.

Since the Nixon era, conservatives have claimed to speak for the "silent majority." Obama represents the future majority. It is the majority of a dynamic country increasingly at ease with its diversity. It reflects the forward-looking optimism of the young. It draws in new suburban and exurban voters whose priorities are resolutely practical — jobs, schools and transportation — and who dislike angry quarrels about gay marriage, abortion and religious orthodoxy.

It is the majority of a culturally moderate nation that warmed to Obama’s talk of the importance of active fathers, strong families and personal responsibility. He emphasized reducing abortion, not banning it. He honored faith’s role in public life but rejected the marginalization of religious minorities and nonbelievers. For large parts of the world, his middle name will be an icon, proof of America’s commitment to religious pluralism.

And Obama not only broke the ultimate racial barrier, he also spoke about race as no other politician ever has. He was uniquely able to see the question from both sides of the color line even as he embraced his black identity. He is not post-racial. He is multiracial. The word defines him as a person. It also describes the broad coalition that he built and the country he will lead.

And the majority Obama built wants the country to be strong but also respected, and prudent in its use of power. Iraq was on the ballot after all: Pew’s final survey found that those who thought the decision to go to war in Iraq was wrong backed Obama by better than 5 to 1; those who thought it right supported McCain by a nearly identical margin.

Obama inherits challenges that could overwhelm any leader and faces constraints that will tax even his exceptional political skills. But the crisis affords him an opportunity granted few presidents to reshape the country’s assumptions, change the terms of debate and transform our politics. The way he campaigned and the way he won suggest that he intends to do just that.

Image by me and the sysop
i woke up today feeling much better, ironically not having taken my crazy pill last night. owen and i went picture taking today and had lunch at mandola’s italian market. oh lord, pot roast and gorgonzola sandwich, the few bites i stole of his lasagna, chocolate cake with coffee buttercream icing!

anyway, all the tea and coke drinking caught up with us, and we just happened to be driving by bailey playground on 33rd by seton. so this is the bathroom i found us. ^_^ there aren’t lights, just sky lights. the door doesn’t really close, and owen could hear me peeing outside. surprisingly the toilet was clean, though.

then the swinging commenced!

my mom boycott worked. she left two messages on owen’s phone, so i finally called her back this afternoon. she told sarah if she ever wanted to drive her crazy, cut the line of communication. "your sister knows how to press all my buttons," she said.

our problems stemmed from one of my sister sarah’s teachers, a 27-year-old pencil dick named mr. burnett. he is a creep, and on more than one occasion sarah has called him a creepy perv to his face. he takes pictures of the girls half his age with his cell phone, he called sarah bitchy, sent her an IM while she was in his class that said "you suck," and then called her fat in front of the whole class.

mom had a talking-to with him, wherein he pulled the trick my real father always did. he pretended like nothing had ever happened and apologized for whatever it was that sarah perceived as an attack on her. he said he’d apologize to her the next day.

his apology? "sorry for being an asshole. i owe you more than that, but that’s all i’ve got." apparently this was acceptable to mom and sarah, and neither of them wanted to report this to the headmaster. thus began the epic brown-oakes battle royale of 2008. my coworkers got a good show as i yell and cussed over the phone, and many a scathing text message was sent.

as it happens, just like i told mother, this wasn’t the first time he’s done something like this. he was pulled from class last week before the headmaster even knew anything about sarah. mom reported what he’d done to sarah, and now we can only pray he won’t be allowed to teach there again. at least this time mom told the headmaster, "if he comes back, i’m going to have a real problem with that."

so, anyway, conflict resolved. she saw where i was coming from and even said i was right. i told her i’m always right, but she doesn’t agree. my main argument was that this is bigger than sarah, it affected every girl he will come into contact with. i guess it just took knowing he actually does do that to other girls for them to see that.