Check out these gigs media images: 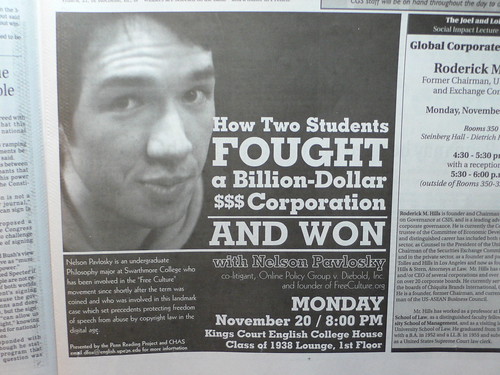 Image by skyfaller
Most of my speaking gigs aren’t advertised in the newspaper… this was a pleasant surprise.

The talk ultimately resulted in this somewhat disappointing article. I think my talk needs work if that’s what the reporter got out of it… this piece is kind of short on content. I think my talk does need some re-organization for clarity, to bring out the themes and support them better. Right now it’s organized around what I did, and what FreeCulture.org does, rather than following free culture themes or explaining what free culture is.

Or maybe the reporter was just on too tight of a deadline, or short on sleep. It is a daily newspaper, after all. 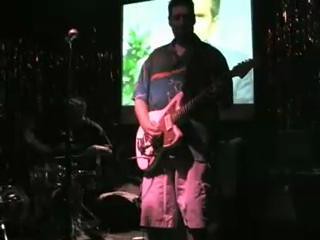 Image by milesgehm
See all the "The Blank Club Nov3_06 – Surf Cinema, Pollo Del Mar, The Why" media

Albert took this video. He said I could post it. Thanks Albert!

I had to leave before the Whys came on. I thought the surf cinema set was good, and the Pollo Del Mar set was really good. I’ve seen them lots of times and this was one of the best.

SURF CINEMA (surf)
Got there a little late and missed the start of the set. Surf Cinema is a three-piece surf cover band that performs while a video projector runs a party mix reel of car crashes, skateboard stunts, animation and clips from BATMAN episodes and MUNSTERS GO HOME. It’s a fun show, and these guys can really rock, like a live, three-dimensional greatest-hits album of surf classics. I’d go see them again anytime. ***

POLLO DEL MAR (surf)
Pollo del Mar’s a four-piece surf band, more sophisticated than the rest. I only recognized a couple of covers, Link Wray’s "Rumble" and a traditional surf classic whose title I just couldn’t think of, but man! The band did a hell of a good job with it. They played a lot of originals, and the songs were pretty good, though they tended to be a little on the long and prog-rock side. There’s nothing wrong with that; I just prefer the traditional surf rock style. I could really appreciate the superb musicianship, though. These guys can teach an old guitar a new trick or two, that’s for sure. I was standing in the back of the club, and could look up to my left at the dressing room window, where members of the Whys could be seen getting ready for its set. Now and then one of them would perch at the window, paying close attention to Pollo Del Mar’s performance, even recording some of it with a video camera. ***

THE WHYS (surf)
Where do I begin? The Whys are a remarkable three-piece surf band from Japan. The guitar- and bass-players are a pair of young ladies who wore little furry swimsuits, caveman-style, and garlands of flowers in their hair. Their instruments were almost as big as they were, but these girls really know how to play. Most of the songs were originals, all in the classic surf style, and the set featured a few covers as well, like Dick Dale’s "Miserlou" and the Chantays’ "Pipeline." I liked them all, and I liked the band even better. They had great energy, but they were also focused on their performance, and the girls executed a lot of synchronized moves that accentuated the music. The set seemed to include every song the Whys knew how to play, and at the end of the show, with the crowd roaring for an encore, the band offered a reprise of "Pipeline" almost apologetically. The crowd loved it, of course, as it loved everything else about the Whys. I loved them too. After the show, Ruiko the guitarist stayed around to sign autographs, even though it was way past midnight, the band had a radio gig in the morning and she must’ve been exhausted. A class act. ****
This video was originally shared on blip.tv by milesgehm with a No license (All rights reserved) license.

What’s really in my carry on bag? – With Flickr notes! 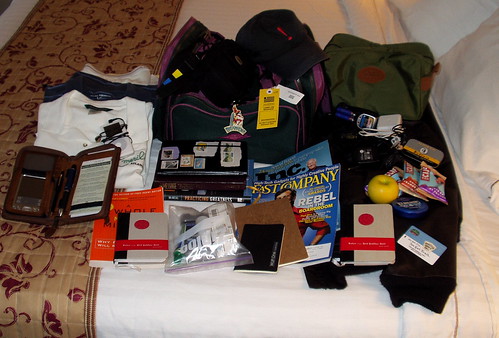 Image by Earl – What I Saw 2.0
I just got back from a couple of days in Cincinnati, and here is all of my stuff. I wanted to go 100% carry on, and made it! This is everything that was in it when I checked into my hotel room. Hit the notes to see what’s what . . .