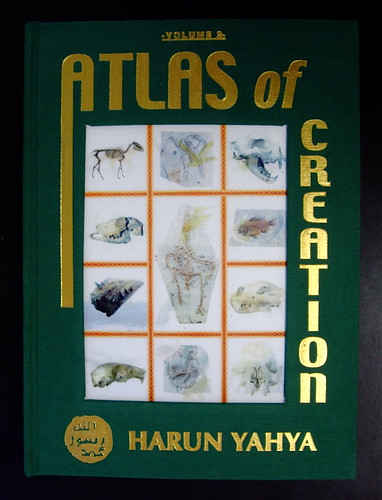 Image by Gravitywave
Our advisor didn’t receive Volume 1, but did get Volume 2. I wonder what we missed!

In the United States, opposition to the teaching of evolution in public schools has largely been fueled by the religious right, particularly Protestant fundamentalism.

Now another voice is entering the debate, in dramatic fashion.

It is the voice of Adnan Oktar of Turkey, who, under the name Harun Yahya, has produced numerous books, videos and DVDs on science and faith, in particular what he calls the “deceit” inherent in the theory of evolution. One of his books, “Atlas of Creation,” is turning up, unsolicited, in mailboxes of scientists around the country and members of Congress, and at science museums in places like Queens and Bemidji, Minn.

At 11 x 17 inches and 12 pounds, with a bright red cover and almost 800 glossy pages, most of them lavishly illustrated, “Atlas of Creation” is probably the largest and most beautiful creationist challenge yet to Darwin’s theory, which Mr. Yahya calls a feeble and perverted ideology contradicted by the Koran.

In bowing to Scripture, Mr. Yahya resembles some fundamentalist creationists in the United States. But he is not among those who assert that Earth is only a few thousand years old. The principal argument of “Atlas of Creation,” advanced in page after page of stunning photographs of fossil plants, insects and animals, is that creatures living today are just like creatures that lived in the fossil past. Ergo, Mr. Yahya writes, evolution must be impossible, illusory, a lie, a deception or “a theory in crisis.”

In fact, there is no credible scientific challenge to the theory of evolution as an explanation for the complexity and diversity of life on earth.

The book caused a stir earlier this year when a French translation materialized at high schools, universities and museums in France. Until then, creationist literature was relatively rare in France, according to Armand de Ricqles, a professor of historical biology and evolutionism at the College de France. Scientists spoke out against the book, he said in an e-mail message, and “thanks to the highly centralized public school system in France, it was possible to organize that the books sent to lycées would not be made available to children.”

So far, no similar response is emerging in the United States. “In our country we are used to nonsense like this,” said Kevin Padian, an evolutionary biologist at the University of California, Berkeley, who, like colleagues there, found a copy in his mailbox.

He said people who had received copies were “just astounded at its size and production values and equally astonished at what a load of crap it is.

“If he sees a picture of an old fossil crab or something, he says, ‘See, it looks just like a regular crab, there’s no evolution,’ ” Dr. Padian said. “Extinction does not seem to bother him. He does not really have any sense of what we know about how things change through time.”

“I think he must have sent it to every full professor in the medical school,” said Kathryn L. Calame, a microbiologist at the Columbia University medical school who received a copy. “The genetics department, the biochem department, micro — everybody I talked to had it.”

While they said they were unimpressed with the book’s content, recipients marveled at its apparent cost. “If you went into a bookstore and saw a book like this, it would be at least 0,” said Dr. Miller, an author of conventional biology texts. “The production costs alone are astronomical. We are talking millions of dollars.”

Fatih Sen, who heads the United States office of Global Impex, a company that markets Islamic books, gifts and other products, including “Atlas,” would not comment on its distribution, except to describe the book as “great” and refer questions to the publisher, Global Publishing of Istanbul. Repeated attempts by telephone and e-mail to reach the concern, or Mr. Yahya, were unsuccessful.

In the book and on his Web site (www.harunyahya.com), Mr. Yahya says he was born in Ankara in 1956, and grew up and was educated in Turkey. He says he seeks to unmask what the book calls “the imposture of evolutionists” and the links between their scientific views and modern evils like fascism, communism and terrorism. He says he hopes to encourage readers “to open their minds and hearts and guide them to become more devoted servants of God.”

He adds that he seeks “no material gain” from his publications, most of which are available free or at relatively low cost.

Who finances these efforts is “a big question that no one knows the answer to,” said another recipient, Taner Edis, a physicist at Truman State University in Missouri who studies issues of science and religion, particularly Islam. Dr. Edis grew up in a secular household in Turkey and has lived in the United States since enrolling in graduate school at Johns Hopkins, where he earned his doctorate in 1994. He said Mr. Yahya’s activities were usually described in the Turkish press as financed by donations. “But what that can mean is anybody’s guess,” he said.

The effort seems particularly odd given the mailing list. Both Dr. Padian and Dr. Miller testified for the plaintiffs in the Dover, Penn., lawsuit that successfully challenged the teaching of intelligent design, an ideological cousin of creationism, in schools there. Other recipients include Steve Rissing, a biologist at Ohio State University who has been active on behalf of school board candidates who support the teaching of evolution and science museums that accept evolution as the foundation for modern biology.

“I don’t know what to make of it, quite honestly,” said Laddie Elwell, the director of the Headwaters Science Center in Bemidji, Minn., which she said received a dozen copies. Chuck Deeter, a staff member, said he and his colleagues might use the books’ fossil photographs in their programs on Darwin, which he said can be a hard sell in a region where many people are fundamentalist Christians with creationist beliefs.

Support for creationism is also widespread among Muslims, said Dr. Edis, whose book “An Illusion of Harmony: Science and Religion in Islam” was published by Prometheus Books this spring.

“Taken at face value, the Koran is a creationist text,” he said, adding that it would be difficult to find a scholar of Islam “who is going to be gung-ho about Darwin.”

Perhaps as a result, he said, Mr. Yahya’s books and other publications have won him attention in Islamic areas. “This is a guy with some influence,” Dr. Edis said, “unfortunately for mainstream science.”

Dr. Miller agreed. He said he regularly received e-mail messages from people questioning evolution, with an increasing number coming from Turkey, Lebanon and other areas in the Middle East, most citing Mr. Yahya’s work.

That’s troubling, he said, because Mr. Yahya’s ideas “cast evolution as part of the corrupting influence of the West on Islamic culture, and that promotes a profound anti-science attitude that is certainly not going to help the Islamic world catch up to the West.”

As the scientists ponder what to do with the book — for many, it is too beautiful for the trash bin but too erroneous for their shelves — they also speculate about the motives of its distributors.

“My hypothesis is, like all creationists, they believe that they have a startling truth that the public has been shielded from, and that if they present the facts, in quotation marks, that the scales will fall from the eyes and the charade of evolution will be revealed,” said Eugenie Scott, director of the National Center for Science Education, which fights the teaching of creationism in public schools. “These people are really serious about this.”

That may be, Dr. Miller said, but it’s also possible “that Harun Yahya and his people have decided that there are plenty of Muslim people in the United States who need to hear this message.”

In his e-mail message, Dr. de Ricqles said some worried that the book was directed at the Muslim population of France as a strategy to “destabilize” poor, predominantly immigrant suburbs “where a large population of youngsters of Moslem faith would be an ideal target for propaganda.”

But despite its wide distribution, Dr. Padian predicted that the book would have little impact in the United States. “We are used to books that are totally wrongheaded about science and confuse science and religion,” he said. “That’s politics.”

An article in Science Times on Tuesday about the widespread distribution of “Atlas of Creation,” a book with an Islamic creationist point of view, misstated the name of a company that shipped some of the books. It is SBS Worldwide Ltd., not SDS Worldwide.