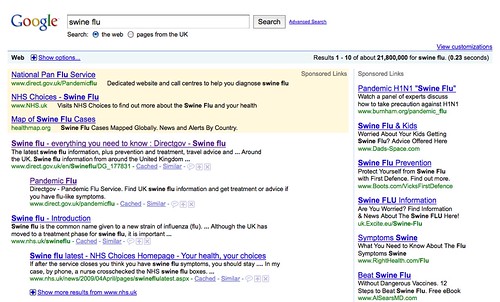 Image by robinhamman
.
The Department of Health has revealed, following a request under the Freedom of Information Act, that it spent £2.7 million on Google Ads last year:

"The Department of Health has been promoting its online services through the use of the Google Adwords bidding systems.

Health minister Phil Hope said that the department spent £2,720,457.11 between 1 February 2009 and 31 January 2010, running 21,939 active search terms on Google’s Adwords service, through which users bid for space on the search engine’s sponsored links."

You can see an example of what they spent our tax money on above. I searched for swine flu. Two of the three sponsored links at the top, one to direct.gov.uk and the other to an nhs website, have been bought with our taxes.

Scroll down a bit and you’ll see that the same two sites come one and two in the real search results. So why bother paying for placement?!