Eddie George Riding In Passenger Seat With Another Woman–Who Copped A DUI!

Home/Phoenix Internet Marketing/Eddie George Riding In Passenger Seat With Another Woman–Who Copped A DUI!
Previous Next

Eddie George Riding In Passenger Seat With Another Woman–Who Copped A DUI! 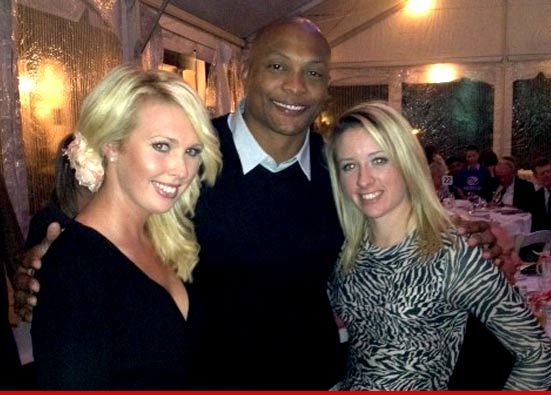 Well this is interesting.  Former NFL star Eddie George–the husband of Tamara "Taj" George from singing group SWV–was caught up in a recent DUI.  But he wasn’t the culprit.  A pro-golfing blonde was.

21-year-old Rachel Connor–a pro-golfer from the UK who is here in America on a visa–was arrested at 2:21AM this morning in Sarasota, Florida for a DUI.  And, according to TMZ, a man identified as 38-year-old Eddie George was in the passenger seat.  Eddie didn’t get arrested, only Rachel.

Her topmost breathalyzer registered at .137, way over the .08 legal limit.  Rachel claimed she only had 2 vodka cranberries earlier in the night.  But cops said she couldn’t walk a straight line or count in numerical order.  She was also cheesing extra hard in her mugshot.

Rachel twitpic’d the above picture several hours before of herself (on far left), Eddie and a friend at an event.  And another pic of them together on a golf course.  So it was likely some type of celebrity golf event.   And apparently Eddie needed a ride back to his hotel?

Fun Fact: Eddie & Taj have a marriage book they penned together that was just released last month called "Married for Real: Building a Loving, Powerful Life Together."  *eyebrows raised*