Home/Text Message Marketing/I am so oblivious when I’m reading text messages on my cellphone that you could dance naked in front of me (but please don’t!)
Previous Next 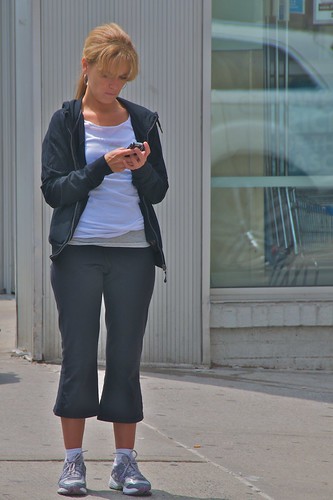 Image by Ed Yourdon
This was taken at the southwest corner of Broadway and 92nd Street; behind the woman is a PetCo pet-supply company.

Looking back on some old photos from 40-50 years ago, I was struck by how visible the differences were between the culture of then, versus the culture of now. In some cases, it was evident from the things people wore, or carried, or did, back then which they no longer do today. But sometimes it was the opposite: things that didn’t exist back in the 1960s and 1970s have become a pervasive part of today’s culture.

A good example is the cellphone: 20 years ago, it simply didn’t exist. Even ten years ago, it was a relatively uncommon sight, and was seen usually only on major streets of big cities. Today, of course, cell phones are everywhere, and everyone is using them in a variety of cultural contexts.

However, I don’t think this is a permanent phenomenon; after all, if you think back to the early 1980s, you probably would have seen a lot of people carrying Sony Walkmans, or "boom-box" portable radios — all of which have disappeared…

If Moore’s Law (which basically says that computers double in power every 18 months) holds up for another decade, then we’ll have computerized gadgets approximately 100 times smaller, faster, cheaper, and better — which means far better integration of music, camera, messaging, and phone, but also the possibility of the devices being so tiny that they’re embedded into our eyeglasses, our earrings, or a tattoo on our forehead.

So the point of this album is to provide a frame of reference — so that we can (hopefully) look back 10-20 years from now, and say, "Wasn’t it really weird that we behaved in such bizarre ways while we interacted with those primitive devices?" 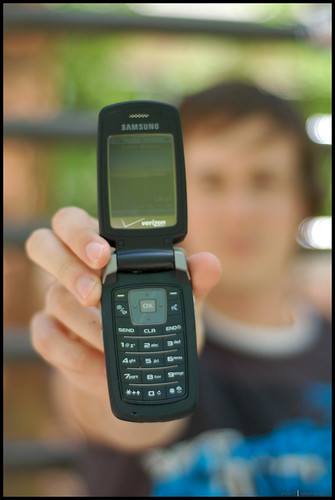 Image by SPangborn
Part of a photo shoot for the Union Programming Council’s marketing campaign for Red Alerts.

If you attend the University of Utah, or just like to go to Crimson Nights, sign up for text message alerts (Red Alerts) here.