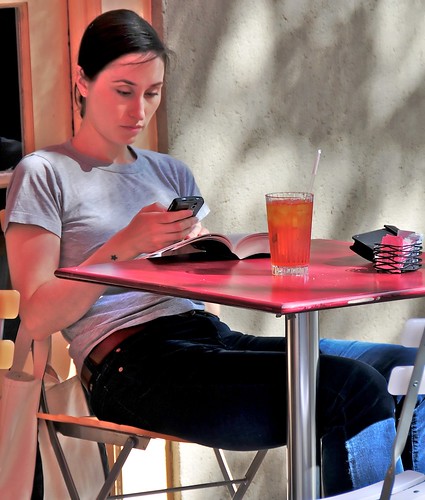 Image by Ed Yourdon
This is an edited version of the original photo, which you can see here. I wanted to reduce the dark shadows on the woman’s pants, so you could see more detail there … but I may have taken away too much of the shadow on her face. I’ll let you be the judge…

This was taken at the deli/bakery (Georgia’s, click here for details) on the southwest corner of 89th & Broadway. This woman was sitting alone, staring into space with a dreamy look on her face, and she would have appeared much more photogenic if I could have moved my camera a little faster and snapped the picture. But then a waiter appeared, bring what turned out to be a glass of ice tea; and he obscured my view of her for a couple moments while he was setting it down. But the time he got out of camera range, she had picked up her cell phone, and was calling someone … perhaps to report on the arrival of her ice tea…

This is an evolving photo-project, which will probably continue throughout the summer of 2008, and perhaps beyond: a random collection of "interesting" people in a broad stretch of the Upper West Side of Manhattan — between 72nd Street and 104th Street, especially along Broadway and Amsterdam Avenue.

I don’t like to intrude on people’s privacy, so I normally use a telephoto lens in order to photograph them while they’re still 50-100 feet away from me; but that means I have to continue focusing my attention on the people and activities half a block away, rather than on what’s right in front of me.

I’ve also learned that, in many cases, the opportunities for an interesting picture are very fleeting — literally a matter of a couple of seconds, before the person(s) in question move on, turn away, or stop doing whatever was interesting. So I’ve learned to keep the camera switched on (which contradicts my traditional urge to conserve battery power), and not worry so much about zooming in for a perfectly-framed picture … after all, once the digital image is uploaded to my computer, it’s pretty trivial to crop out the parts unrelated to the main subject.

For the most part, I’ve deliberately avoided photographing bums, drunks, drunks, and crazy people. There are a few of them around, and they would certainly create some dramatic pictures; but they generally don’t want to be photographed, and I don’t want to feel like I’m taking advantage of them. I’m still looking for opportunities to take some "sympathetic" pictures of such people, which might inspire others to reach out and help them. We’ll see how it goes …

The only other thing I’ve noticed, thus far, is that while there are lots of interesting people to photograph, there are far, far, *far* more people who are *not* so interesting. They’re probably fine people, and they might even be more interesting than the ones I’ve photographed … but there was just nothing memorable about them. 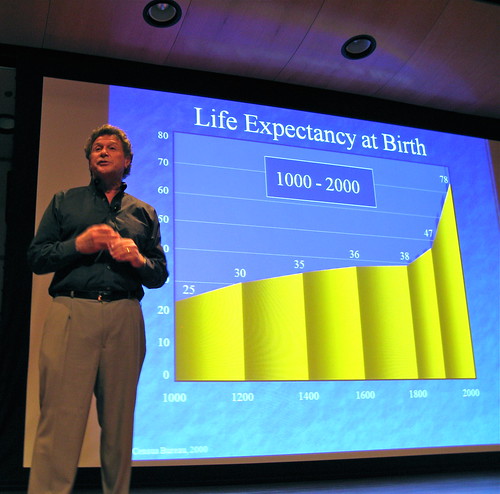 Image by jurvetson
Ken Dychtwald has focused on aging and the Boomer market for 30 years:

“Throughout most of history, people didn’t age.
They died.”

“Not many people have seen the long term graph [below]. For 99% of human history, longevity was under 18.”

John Glenn, in response to a reporter’s question that his recent return to space was a stunt: “Just because I am 77 doesn’t mean that I don’t have dreams.”

“Only 25% of Boomers are financially prepared for retirement.

60% of personal bankruptcies are due to a health crisis.

From the Boomer Venture Summit this morning. (Some earlier blogging that I incorporated into my “Demography is Destiny” talk.) 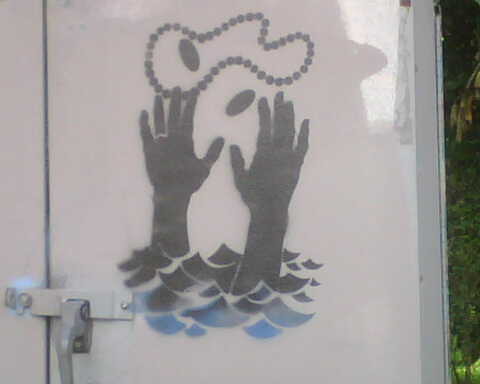 Image by mags504
i see this stencil every tuesday when i go to the farmer’s market uptown and i finally remembered to pull over and snap a picture with my cell phone. i’ve seen this one around a bit but i really can’t believe it hasn’t been buffed due to its high visibility in a fairly well to do neighborhood. but maybe it’s beauty has kept it from being removed…