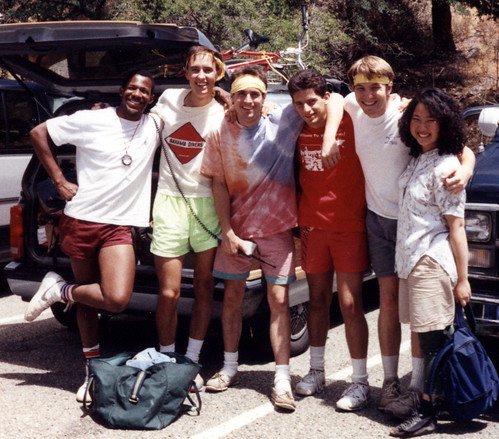 Image by jurvetson
An old and weary photo of the Yellow Team at Pinnacles… having just won a 21 hour scavenger hunt, called simply, The Game.

You can see the makeshift bike rack on the van roof and the bulky cell phone that we rented in Ric’s hand. There is something about the adrenaline of a overnight race that bakes each of the puzzles in memory… crawling through the sewers of Los Gatos, snorkeling in the frigid waters of a quarry to find an underwater clue, shimmying across a red rope tied high between two power pylons near SFO, calling the Stanford computer center at 3am (reaching someone!) and having them quickly solve a 17-order polynomial equation, shooting at a helium balloon as it rose into the sky with our next clue, chasing a car that delivered an encrypted message on a streaming LED display, climbing surreal seaside artillery ruins…. (more examples in the newspaper clip below)

– TV News (I make a cameo appearance at 0:53) and News 2 (GameControl site is often down; more stable links below)

Image by viewerblur
Well, I can fit a lot into my purse.