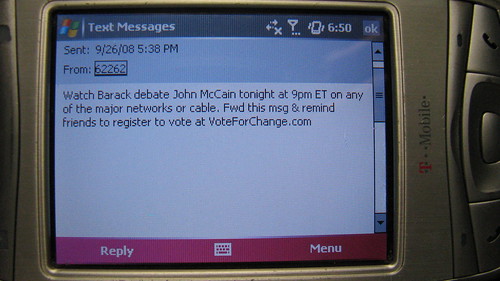 Image by DavidErickson
Text Message Reads: Watch Barack debate John McCain tonight at 9pm ET on any of the major networks or cable. Fwd this msg & remind friends to register to vote at VoteForChange.com 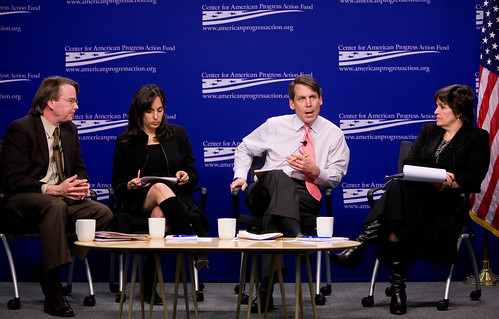 Image by Center for American Progress Action Fund
As unemployment climbs to new highs, and with prices of every day necessities on the rise, American families have taken on a near-record amount of credit card debt to cope with their bills. While no one can doubt the convenience of credit cards—they have replaced cash and checks for every day transactions at the supermarket and pharmacy—cardholder agreements are written in a way that may obscure, rather than clarify, important terms and conditions. These problems could be avoided with a two-pronged solution: first, legislation that would eliminate some of the abuses in the credit card market, and second, orienting cardholders toward making better decisions with their credit cards.

We invite you to join us as Rep. Carolyn Maloney (D-NY) speaks about her bill that will eliminate many common credit card abuses. This will be followed by a panel discussion of a new paper to be released by the Center for American Progress. The paper proposes that in addition to eliminating the worst of these abuses, Congress should require that card issuers implement a new system that would lead to better credit card outcomes through electronic reminders at "teachable moments" when needed—by sending a text message several days before a due date with a warning of the penalty for being late, for example.

For more on this event, please see:
www.americanprogressaction.org/events/2009/02/debt.html