Check out these Modem Pool images: 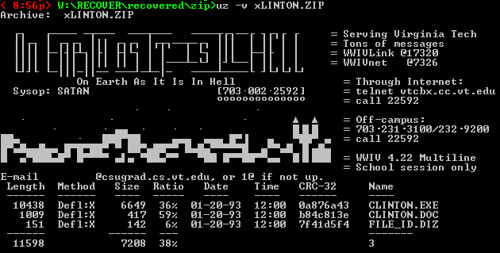 Image by Rev. Xanatos Satanicos Bombasticos (ClintJCL)
I used to run a BBS called On Earth As It Is In Hell (click to view old messages and oneliners and such).

Anwyay, yesterday (1/30/2007) I was going over some recovered files from a harddrive crash I had around 1996. In looking at the zip files, I found two different automated zip comments I had created. This was one of them.

It was the ANSI login graphic from my BBS, shrunken from 80×25 to a smaller size, with the color removed.

Image by sunside
View On Black · This is the view from the Liebknechtbrücke – a bridge crossing the river Spree in Berlin – as per November 2008. The four big concrete things to the left are the remains of the Palast der Republik, which is currently going the way of the Dodo in favor of the reconstruction of the older Stadtschloss (‘City Castle’, see this postcard from about the year 1900).
At the middle left you can see the Berlin Cathedral, to the right is the DomAquarée, a relatively new complex containing some hotels and … actually I don’t really know what that colorful thing is there for, except for making money. One of the horrors of contemporary German TV, the Jamba! corporation, has it’s headquarter up there. So, if you’re ever "not amused" by some sort of dancing and singing hippo, annoying frog, smitten bunny or any kind of bad cell phone ringtone, please feel free to drop your nukes there. Down the street to the right you’ll see the St. Mary’s Church, which belongs to the Alexanderplatz. (Well, you’ll most probably not see it right now, because it fades into the background a bit.) The huge TV tower is currently hidden by the fog, too, but unlike the St. Mary’s Church you really can’t see it in this picture. On the far right, next to the trees, you’ll see the St. Nikolai’s Church and the Nikolaiviertel. If you follow the Karl-Liebknecht-Straße – the street you’re looking at – to the left you’ll eventually cross the Friedrichstraße, currently dubbed Upper Eastside by some marketing geniuses (really, that’s no attempt to translate it into english – they seriously call it "Upper Eastside") – and arrive at the Brandenburg Gate.
It’s on the map, if you’re interested. Or ask, if you like.

I’d recommend viewing it en large. It’s not much bigger, but it’s still a bit better to look at. Original resolution should be available, too, but it’s quite heavy; about 3 MiB or so, so you’d better not try that on a lovely 58k line (or even lovelier, anything slower … oh well, where’s the time … I do have an old 28k modem lying around here somewhere). 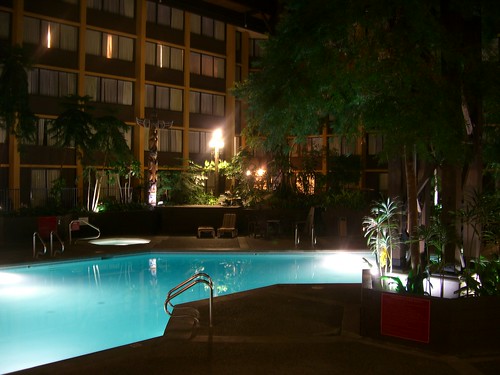 I have a special fondness for this pool. About 10 years ago I swam here on my way back from Siberia (and on to Florida, as I recall); I had been flying around Russia with Nathan Myhrvold visiting post-Soviet scientists (including physicists in two closed atomic cities). His plane’s battery had died unexpectedly in Novosibirsk, so we spent an extra night there. This was my first swim and also my first Internet connection in several days. I plugged in my computer’s modem line (yes, it was that long ago!) and set it to download my mail while I was swimming. An hour later it was still sucking down mail, and I was totally refreshed.

More recently I came here one morning after a night at another hotel without a pool (everything was booked; long story), and rented a day room just to use the pool. (No pool passes, the clerk told me.) But when I went to check out, another clerk looked at my bill, said "Only 90 minutes?" and tore it up. This is long enough that I can tell the story without getting that clerk in trouble; I’m sure he is elsewhere now and I hope he is doing well! (If there is anyone from Marriott management reading, please note that I came back for a more expensive, overnight stay!)