See All the Action From the Billboard Music Awards Stage

See All the Action From the Billboard Music Awards Stage 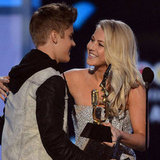 The 2012 Billboard Music Awards brought plenty of famous faces to the MGM Grand in Las Vegas Sunday. LMFAO, who won six awards, opened the show before hosts Julie Bowen and Ty Burrell took the stage. A variety of artists including The Wanted and Kelly Clarkson, introduced by Robin Thicke, had their turn in the spotlight. Carrie Underwood, who brought husband Mike Fisher, performed “Blown Away” in a glamorous red dress, while Natasha Bedingfield sang a tribute to the late Donna Summer. Katy Perry rocked the crowd with the debut of her new single, “Wide Awake,” and Usher brought “Scream” to the stage.

Justin Bieber took the microphone as well with “Boyfriend.” Jordin Sparks shared a moving rendition of “I Will Always Love You,” honoring Whitney Houston, after John Legend kicked it off with “The Greatest Love of All.” Bobbi Kristina then accepted the millennium award for her mom, saying, “I’m just blessed to have been in such an incredible woman’s life.” There were many more statues given out this evening with Julianne Hough presenting Justin with top social artist. New Girl‘s Zooey Deschanel was on hand to introduce Billboard’s woman of the year, Taylor Swift.

Make sure to check out the full list of Billboard Music Awards winners!